David Vondrasek is a biologist at the Institute Of Physiology, Czech Academy of Sciences, part of Euro-BioImaging’s Advanced Light and Electron Microscopy Prague Node. Since 2018, he has been developing a Coherent Anti-Stokes Raman Scattering (CARS) & Stimulated Raman Spectrometry (SRS) microscopy offer for users at his facility, based on adaptations to the Bruker Ultima upright microscope his facility owns and operates. In the past months, he and his users have been getting interesting results, especially on spinal axon. But David wasn’t satisfied - he wanted even better results. So, colleagues from the Euro-BioImaging Expert Group he’s part of put him in contact with Antti Isomäki, a CARS expert who is also working with SRS at the medical campus of the University of Helsinki, part of our Finnish Advanced Light Microscopy Node. Here are some notes from their exchange.

The snow was falling hard, it was windy and the temperatures were well below zero when David’s plane landed at Helsinki Airport. Despite the weather, David went directly to the medical campus at the University of Helsinki. This is where Antti works and where the CARS microscope that is available in open access as part of a Proof-of-Concept study for Euro-BioImaging is housed.

“It was really nice to welcome David. He’s setting up his own CARS system and he’s been successful in imaging with it already. But he wanted to get some ideas on how to improve his system. So, I gave him a demonstration of our CARS system.”

“We acquired this instrument in 2012, because it’s a label-free technique and we had an active group working on lipid droplets in fixed and live cells. Later, the technique proved to be perfect for studying pharmaceutical materials, for example drug crystallization. Today we have demonstrated high-resolution chemically specific imaging of drug microparticles in cell cultures and tissue. Our instrument is fully equipped with confocal/fluorescence light microscopy capabilities in addition to CARS and allows us to serve multiple users,” says Antti. “We currently offer open access to this instrument to external users as part of the Euro-BioImaging Proof-of-Concept study, so anyone who’s interested can try it out (more).”

While the CARS system in Helsinki is a commercial system, David started in 2018 to built his own system by equipping an existing system with additional lasers and other adaptations. But he was always a bit unsure if there were any technical limits due to the homemade approach. Especially as, despite implementing a detector sensitive in IR region and working on building the selective detection unit, he and his colleagues hit a wall with regards to depth imaging. 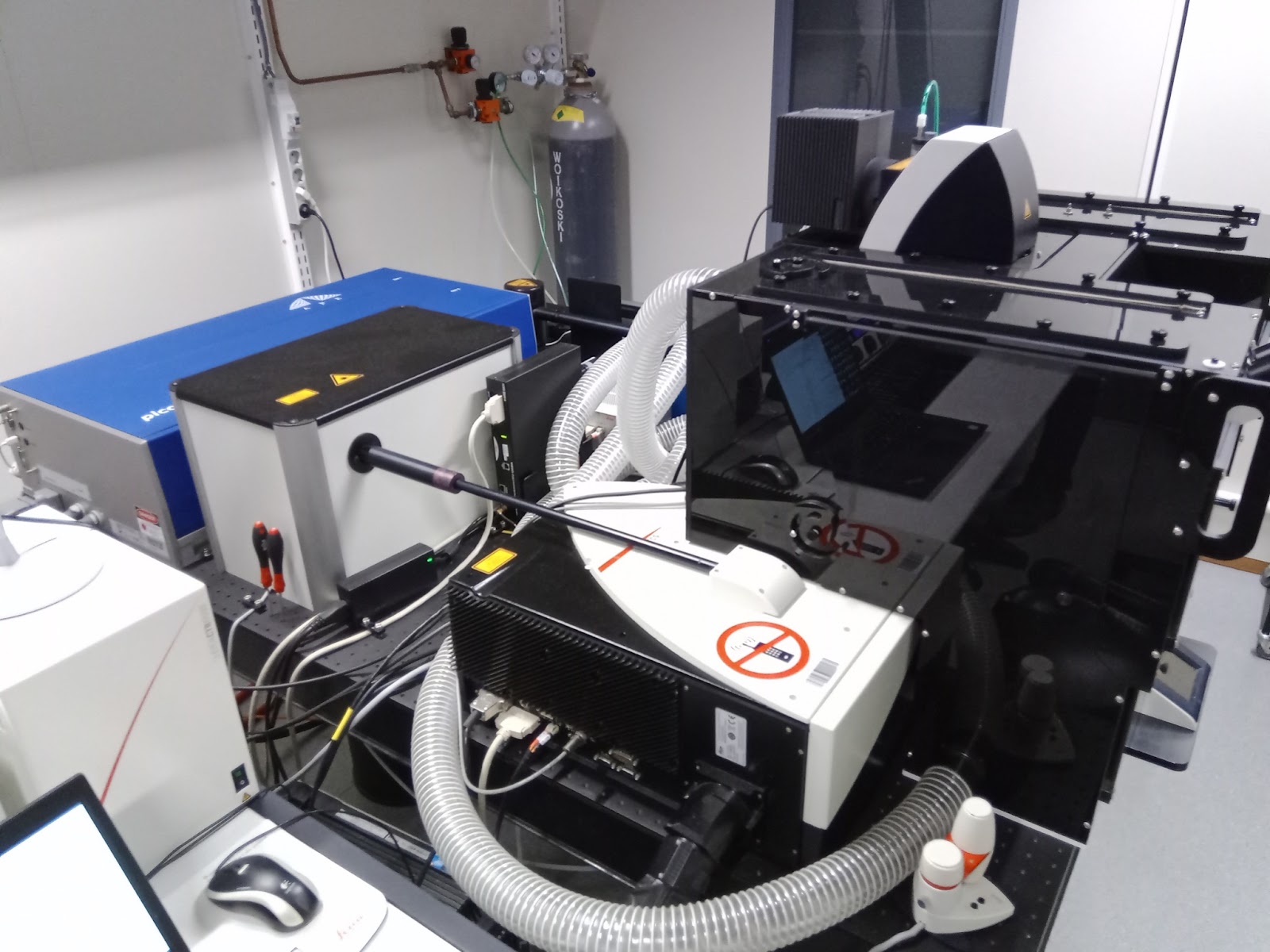 View of the commercial CARS system at the Biomedical Facility of the University of Helsinki.

“The main purpose of my visit was to see how experts tackle the problems of depth imaging, and also to observe how they handle selective detection of the vibrational frequency and CARS imaging in general,” explains David. “With our CARS set-up, we have obtained nice images of spinal axons, specifically their myelin sheath. However, the visualized depth of the axons was about 1.5 to 2 layers, which was about 60 µm deep.”

After Antti and David discussed the possibilities of depth imaging and general CARS imaging troubleshooting at the commercial CARS  instrument, Antti showed David a second system, focussed on Stimulated Raman Spectrometry (SRS). Antti considers this system to be complementary to CARS as it offers improved spectral analysis possibilities for advanced users.

Teemu Tomberg of the University of Helsinki Chemistry Department developed the system here, so Antti invited him to exchange with David. Teemu explained how the SRS system worked.

“Teemu advised me on the SRS components that we could implement in our system and the selective detection unit. He cautioned me about the signal loss at diffraction gratings and made some suggestions to the monochromator setup I was planning to build. We also talked about software development,” says David.

“For us, David’s visit was also extremely fruitful,” says Antti. “For example, David is interested in intravital in vivo imaging and he’s been working to set up that CARS technique for brain imaging. This is interesting for me, because we have a multiphoton in vivo imaging system for imaging mice and rats, and we have been thinking about using this system with CARS microscopy. It was good to share feedback on the common problems we have with this type of imaging. Through these exchanges, we come closer to finding solutions.”

David left a snowy Helsinki with lots of ideas to improve his system. And Antti is looking forward to implementing experiments with multi-photon/CARS imaging.

The story continues but at Euro-BioImaging we are happy to fulfill one of our important missions: contributing to fruitful scientific exchange between experts at our Nodes. We look forward to the user projects that are made possible the expertise sharing through such exchanges.

Learn from the experts

If you are interested in visiting a Euro-BioImaging facility to learn about a specific imaging technique you want to develop at your facility, please contact us at info@eurobioimaging.eu.