Scientists have made extraordinary progress in understanding stroke and the effects it has in the brain, but are still exploring the finer details of why some brain cells die and others don’t during and after a stroke. We spoke with Euro-BioImaging user Dr. Andrew Boyce, who is looking closely at the cell death process, with a particular focus on dendritic blebs. Widely believed to be pathological in stroke, Andrew believes that blebbing dendrites might be more than just a step in the cell death process - and could hold the key to understanding what neurons can do to protect themselves from the propagation of the cell death caused by a stroke. But in order to support his hypothesis, he must get a holistic picture of this phenomenon. Using state-of-the-art super resolution microscopy techniques at the Bordeaux Imaging Center, part of France BioImaging, he hopes to do just that.

Dr. Andrew Boyce is a postdoctoral fellow at the University of Calgary, who has always been interested in microscopy – particularly live cell microscopy. He joined the research unit of Dr. Roger Thompson at University of Calgary’s Hotchkiss Brain Institute (October 2017) in order to study the dynamic morphology of neurons during stroke, in particular the processes of blebbing and cell death – both of which are fascinating to observe from a live cell imaging point of view. The ultimate goal is to provide insight into how contact from neighbouring cells and extracellular space remodelling around blebbing dendrites contributes to lesion expansion following focal excitotoxicity. This means understanding how cells across the brain react to strokes and protect themselves from waves of toxicity emanating from the stroke, potentially leading to new therapy options.

“Healthy neurons are tree-like, with their cell body representing a trunk (housing the nucleus and other important cellular components) and their dendrites forming the branches. When a neuron gets sick, due to a stroke for example, beads form throughout their branches. Those are called blebs. During stroke, blebbing happens very rapidly when a neuron is deprived of oxygen and glucose. What’s amazing is that these branches and thei dendritic spines can also recover to their original state if they are reperfused within about 10 minutes.”

Andrew’s work is about proving that blebbing is something more than a just a step on the way to cell death. At his home institute he works with hippocampal neuron cultures, performing confocal imaging of cells that are labeled with fluorescence. Traditional approaches to studying the mechanisms of stroke in vitro are to bath apply a toxic stimulus to deprive the cells in the brain slices of oxygen and observe the mechanisms the cells use to protect themselves. This is similar to what happens at the core of the stroke, where cells have no more oxygen. But Andrew is more interested in the cells that are on the periphery of the stroke core and have an increased chance of survival. In Calgary, Andrew developed an in vitro model for studying these cells and began to identify ways in which neurons protect themselves during stroke, but that is only part of the story. The context of the cellular environment around these sick neurons also contributes to their survival, this context isn’t observable with the traditional microscopy approaches available to him.

Getting a holistic picture

This is why Andrew travelled to Bordeaux, France, as a Euro-BioImaging user supported by the Euro-BioImaging Pilot User Access Fund, to use a combination of live cell 3D stimulated emission depletion (3D-STED) microscopy and super-resolution shadow imaging (SUSHI), moving from studying cells in culture to the improved context of brain slices.

Andrew first heard about this approach in 2018, when Valentin Nägerl from the Bordeaux Imaging Center came to the University of Calgary to present super-resolution shadow imaging (SUSHI), which Nägerl’s team developed.

“SUSHI imaging is unique. Instead of using the classic approach where you fill a cell up with fluorescence to view its morphology, with SUSHI, you fill the space around cells with fluorescence. It’s kind of like looking at the negative of a photo. And since it’s a super-resolution technique, it allows you to visualize fine details of cell-cell interactions and the extracellular space in an unbiased manner. In a marriage with the stroke model I developed at my home institute, I can target a single cell, create a small stroke-like injury, and see clearly how the cells surrounding it respond using SUSHI. With traditional approaches, I can only see how the cell itself responds, so together we get a complete picture.” 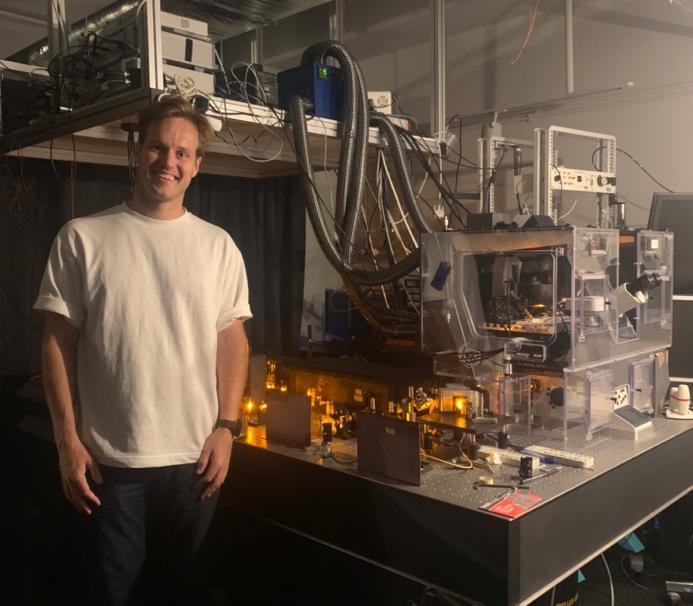 Andrew Boyce with the 3D-STED microscope at France BioImaging.

Valentin’s presentation really planted a seed. But in 2020, the pandemic hit, making it difficult to travel. Andrew tried SUSHI at a nearby institution in Canada, but saw an opportunity to make a giant leap in this approach by working with the pioneer of the technique. Finally, he contacted Valentin to see if it was possible to work together to answer his research question.

Valentin was very interested in collaborating. The Bordeaux Imaging Center (BIC) is part of France BioImaging, Euro-BioImaging’s French Node, and it is therefore possible for external scientists to apply for access to use the imaging instruments with the help of expert staff.

In addition, they have a neuroscience focus. Brain tissue is complex and SUSHI is a technique that allows researchers to visualize all of the cells in this very complex architecture in an unbiased manner. At the time Andrew contacted Valentin, the first pilot call for projects to be supported by the Euro-BioImaging User Access Fund was underway. Up to 5,000 Euros were available to support travel and access costs at the Euro-BioImaging Node. Together, Andrew and Valentin wrote the proposal so it was very clear how the techniques available at BIC would help tackle Andrew’s research question.

In February 2022, Andrew’s project was selected for funding in a highly competitive evaluation process. It was like a dream come true for Andrew, who immediately started to prepare his trip. “These days you can access the raw materials to do the same science anywhere around the world, so preparing for the trip was relatively easy - I just ordered the same scientific reagents I use in Canada and had them shipped to France in order to prepare my model. To be honest, the most difficult part was applying for a visa during early waves of COVID,” he explains. “But even that wasn’t too difficult. This is really an incredible experience. It’s amazing to be trained by the person and team who pioneered this technique. I’m very thankful for this opportunity and humbled to be over here,” reflects Andrew from Bordeaux.

When asked how his visit to Bordeaux might impact his career, Andrew explains that he can certainly imagine doing SUSHI in the future. He would eventually like to run his own lab at an academic institution in Canada. Being able to bring an exciting and novel technique like this back to Canada would be really impactful for his career, and for science in general.

“SUSHI is a very exciting technique for studying brain tissue, but getting started on sample preparation and adapting this technique to your research question can be daunting. Coming to the Bordeaux Imaging Center to work with the person who developed this approach and get expert training is a dream come true and will make a big difference to my research. This is an amazing opportunity made possible by the Euro-BioImaging Pilot User Access fund with the goal of making shadow imaging more accessible across diverse platforms,” concludes Andrew.